What was it like, being a woman in the Ancient Roman Empire?
Ancient Rome was a misogynous society. 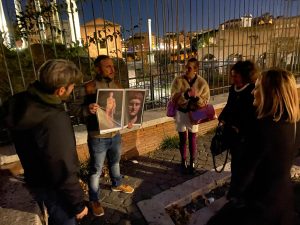 At that time, many men thought that an educated woman who was also able to confront them was the most disgraceful thing ever. How could a woman make a mark, in those days?
Now for the first time ever, there finally is a storytelling tour that aims to answer such questions. Women are in the spotlight in this one of a kind evening tour. They will impress you with how incredibly remarkable they were in ancient Rome. Let’s shine a light on the mothers, the workers, and the “First Ladies” who ran an Empire, back in the day.
These women are eager to have their voices be heard and they will roar at you their untold stories.
Meet Agrippina, mother of Emperor Nero and sister of Emperor Caligula, and be in awe when you hear of her incredible life. Discover powerful priestesses known as Vestal Virgins and why they were so significant to Rome, in antiquity. Hear about Empress Livia, wife of Augustus, and see how she became an icon for all the other Roman Empresses to come.
The tour takes place in a marvelous setting. Together with your English-speaking tour guide, you will take a stroll by the Roman Forum at twilight, admiring one of the most important archaeological sites in the world from an unusual angle. See the ruins that are a testament to those women’s lives and discover how much of the city of Rome still proves their existence. It is time to delve deep into the lives of fierce and badass women who, at that time, pulled the strings of one of the greatest empires ever, Rome. On this unique tour, you will hear about some of the most famous women in history… ever!!! Don’t miss it.

Discover the stories of Empresses and ordinary women from the Roman Empire, hear the tales of some of the most famous women in history ever

Experience this unique version of a Colosseum Tour, in combo with the Best Ancient Roman artworks and artifacts ever..... Read more

Learn about 7 historical women and their struggles to elevate from poverty, or to have a voice in the Renaissance Era.. Read more

A Night with the Vatican Museums & Sistine Chapel

In a nighttime setting available seasonably only on friday evenings, the Vatican Museums opens after hour.. .. Read more