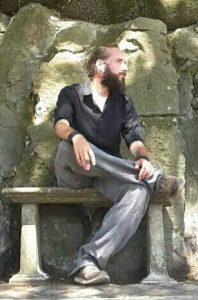 My name’s Rob and confess to have fallen madly in love with Roman/Italian history and the vivid, passionate, storytelling required to share such a complicated love!

Born in Italy (from an Italian mother and American father) on a U.S. Naval base just south of Rome in a little historical port town called Gaeta, my love of this country began, even though slight at the time.

Childhood brought me to live around the world on various American military bases until high school brought me back. I believe this moving around at such an age truly opened my eyes on the diversity of cultures, languages, and art around the world and how history has a major role in these differences.

University in Rome brought me to delve much deeper and formally studied multiple subjects over a decade; from geology to languages to history.

Never intending to become a tour guide, or a public speaker for that matter, in 2006 the opportunity fell from the sky and I took it, cultivated it, and have ever since fallen in love with it!

As an artist, and painter, I’ve realised that a simple historical explanation, potentially boring, can really become a canvas to depict such vivid and emotional historical landscapes for people to be drawn into. As a father (three children as I write this) I’ve realised that any explanation has to be fun in order to really capture one’s attention. Over a decade of guiding experience really made these simple concepts hit home: an historical explanation melding emotion and a bit of fun will interest, and stay with the listener forever!

Storytelling has become my life, and life mission, and shall, as long as I can, be what I do in this Eternal City!

Hope to see you and to be given the opportunity to whisk you off on a historical/cultural journey the likes you’d regret missing!